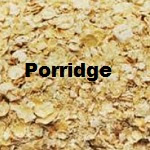 It's Scotland, it's cold, it's wet, it's windy, it's June and we're still doing porridge for breakfast, so here's how to turn a pound into a tenner, if you are feeling charitable and sociable.

I'm very cynical about recommended serving sizes as these, in my opinion, cannot possibly be true; there are far too many different lifestyles to cover for anyone to make such a generalisation with regards to calorific or nutritional intake. You're going to get fat if you eat more than you burn and you're going to starve yourself to death if you follow the recommended 2,000 or 2,500 per day when your daily lifestyle is burning up over 3,000+ calories!
But back to the porridge project:
Per person
1 x small cup (50g) of porridge oats per person
2.5 x small cups of water per person
Pinch of salt per person
This takes about 5 minutes to cook a portion of porridge in a microwave, slightly longer if you are doing a pot of it on the cooker top, perhaps 10 minutes in total, but chances are the electricity costs will be similar. To make one person one bowl of porridge would use approximately 2p of electricity but to make ten people a bowl each in a big pan would NOT cost 20p, it would probably cost less than half of that. This is what I call quantitative easing in the cooking department.

OK, so we have arrived at 10p for cooking and I'm not even going to count in the pinch of salt, as it's cheaper than chips and some may prefer to leave it out the porridge in the first place.

Most people like a splash of milk and a sprinkle of sugar and both of those items are fairly cheap at the moment - 49p per kilo for sugar (10 teaspoonfuls costs about 2.5p) and around £1.00 for a cheap 2 litre carton of milk, which should be enough for 20 servings of porridge, but we need only half of that, so 50p.

Are you adding it all up?

If you can find 10 friends, family members, neighbours or work mates to bring a bowl and pay you £1.00 each for homemade porridge, you will have turned your pound investment into £10.00 and all in the space of about quarter of an hour.

So there you have it! You can feed 10 people a warm and filling breakfast for £1.00 but if you just happened to be charging them £1.00 each for the luxury of having their breakfast made and provided for them, that's shown a profit of 900%
Would you pay £1.00 for a bowl of freshly made porridge?  Or perhaps you already have, if you've ever bought one of those 'just add boiling water' concoctions that supermarkets now sell in waxed cardboard cups.